Where coal was once king, we are powering towards a renewable future

Could we one day get 100% of our energy from solar and green sources?

People from older generations can remember the time when coal was king, with it delivered in sacks and kept in a bunker out the back of the house.

In fact, it was the dominant force in U.K. energy from the 1800s, and while it powered the Industrial Revolution, a very different type of revolution is happening now – a solar-powered one.

Things have changed fairly quickly because fossil fuels – which also include natural gases – were providing us with about 80% of our electricity a decade ago and as recently as 2014, coal alone was responsible for 30% of the UK’s energy needs.

But fast forward three years and in 2017 we had our first coal-free day, with this stretching to a week in 2019 and now it’s disappeared off the radar.

What sources of energy are we using now instead?

While we are in the process of leaving the EU, its target for member states was to have 20% of all energy from renewable sources by this year and 32% by 2030.

But the U.K. is already well ahead of that, with green energy – which also includes wind and hydro – providing more electricity to U.K. homes and businesses than fossil fuels for the first time in 2019.

In fact, the renewable record was set in the third quarter of 2019 when its share in the mix here reached 40%.

And for the first time since the Industrial Revolution, sources such as renewables and nuclear are providing more energy than fossil fuels such as coal and gas.

But how much of our energy needs can we expect to be met by renewables such as solar in the years ahead?

The U.K. government predicts half of the U.K.’s energy will come from renewable sources as early as 2025 and these will power seven million homes.

But the sky is the limit when it comes to solar energy and that prediction is already far higher than the one made as recently as four years ago.

As coal power stations are closing down ahead of being phased out by 2025, more and more solar panel installations are appearing.

And the beauty of these systems is they can be anywhere from barn or house roofs, in fields, on land or at business premises.

Companies such as HIT Energy Services are able to install and monitor them, meaning we can create as much green energy as possible, with no emissions, reducing our impact on the planet.

They also cut out the middle man and more and more housing associations, local authorities, businesses, homeowners, universities and farmers are turning to the sun to provide them with power.

Wouldn’t it be great if we could complete the turnaround?

From the days of the Industrial Revolution when most of our power was from fossil fuels to the height of the solar revolution where 100% comes from renewables. 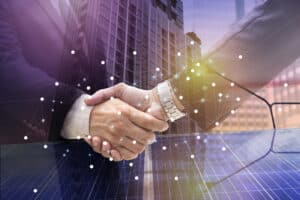