Pioneering technology that is revolutionising the solar industry is in the running to scoop a prestigious award.

HIT Energy Guard is developed in Lincolnshire, helping farmers and businesses across the UK ensuring correct returns on renewable investments.

This is achieved from HIT Energy Services’ bases in Lincoln, Grantham and engineers around the UK, monitoring thousands of solar panels across the UK and ensuring they are generating as much clean, green energy as possible.

HIT Energy Guard has been short-listed as a finalist in the Lincolnshire Business Awards, after being entered in the innovation category.

It takes place on 17 October, and HIT Energy Services’ Simon Hopkins said: “We were shocked and excited to find out, but it is reward for all the hard work that has gone into developing our products by the team.

“The HIT Energy Guard is placing Lincolnshire at the centre of solar technology in the future, as more and more panels throughout England, in Wales, Scotland and Ireland join our network.

“There are thousands of businesses generating clean, green energy in an environmentally-friendly way, but many are losing production with out their knowledge and just blamed on the weather or simply blind to issues with their investment.”

It was more than a decade ago that new technology started appearing in farmers’ fields across the UK – solar panels, which promised to revolutionise their business, generating electricity for them.

HIT Energy Services’ Engineers were the first to attend a Solar PV site capable of generating over a megawatt of energy in 2011 and has been involved in some of the biggest and most complex generation projects in the UK and Ireland.

Through this experience, its engineers have developed equipment that can monitor panels and work out generation each hour based on weather stations based within the power plant.

Many farmers and landowners are unaware that some of their panels are operating at 80%, 70%, or sometimes 50% or below, meaning they are losing thousands of pounds a month.

Sometimes they have simply been covered in dirt due to the environment and require a clean, others were installed poorly with production issues and in need of a health check.

HIT Energy Services ensure the plant is producing as per designed and then monitors them to ensure that they keep on generating as much energy as possible.

Simon added: “It is great to be recognised by the Lincolnshire Business Awards”. “While the reach of the Energy Guard is unlimited and we could help farmers in Europe and across the world save money – the business and the concept has its heart here in Lincoln and Grantham.”

Solar panels were once seen as revolutionary technology, fitted across the country, but often with little thought about how they would continue generating long

The innovation of HIT Energy Services’ engineers means these expensive investments can continue to prove lucrative for farmers and businesses rather than becoming a cost burden.

The team will now be interviewed by judges ahead of the announcement of the winner on the awards night. 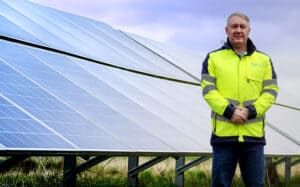