HIT Energy Services link-up with a major agricultural group to improve Solar PV output at sites around the U.K.

Lincolnshire based solar energy firm is set to start saving farmers around the UK thousands of pounds by updating their systems through a link-up with a major agricultural group.

HIT Energy Services has commissioned some of the most complex Solar PV sites around the country, but its expert engineers have now also developed a system that allows it to monitor sites into the future, ensuring they keep on generating high levels of power.

It has linked up with The AF Group, a Norwich-based agricultural organisation that works in areas such as crop protection, fertiliser, livestock and feed, fuel, machinery and buildings.

“Solar panels were installed by farmers up and down the country on barn roofs and in fields more than a decade ago as a lucrative investment,” said HIT Energy Services’ Simon Hopkins.

“However, issues, that may be something as simple as they have become covered in muck to they have malfunctioned or weren’t installed properly means they are not generating as they should be and the business is losing money.”

An example of one business that was losing huge sums of money was Norfolk-based HBS Farms, which invested £1m in Solar PV back in 2011.

HIT Energy Services started working with the firm this year and began monitoring its solar production on an hourly basis.

Simon added: “The biggest issue is the farmers either don’t know there is a problem or they simply don’t know who to contact to give them some help.

Defects were identified at HBS Farming, their panels were underperforming and losing the business thousands of pounds – HITS’ engineers were able to get them operating at full capacity again and will now monitor to ensure they keep on producing as much clean, green energy as possible in the future.

And if there are any further issues, they will be straight on site to tackle the problem before any more money is lost.

It is pioneering technology that has the ability to save businesses millions in total and through the link-up with The AF Group, thousands of businesses will be able to benefit from it. 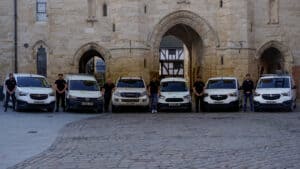